Recently, we faced the challenge to perform complex transformations in Logic Apps. We had an EDIFACT D96A ORDER parsed into XML, that had to be transformed into a generic JSON Order format. Let's have a look the issues we faced!

The first reflex was to go for Liquid templates, because the expected output format was JSON.  Pretty soon, we realized that Liquid has too many limitations for our scenario:

As a second attempt, we decided to go for XSLT!  We leveraged the Transform XML action, which executes an XSLT mapping.  We transformed the EDI XML into the XML representation of the JSON Order, so we could use the built-in json() function to convert the output XML into its JSON format. 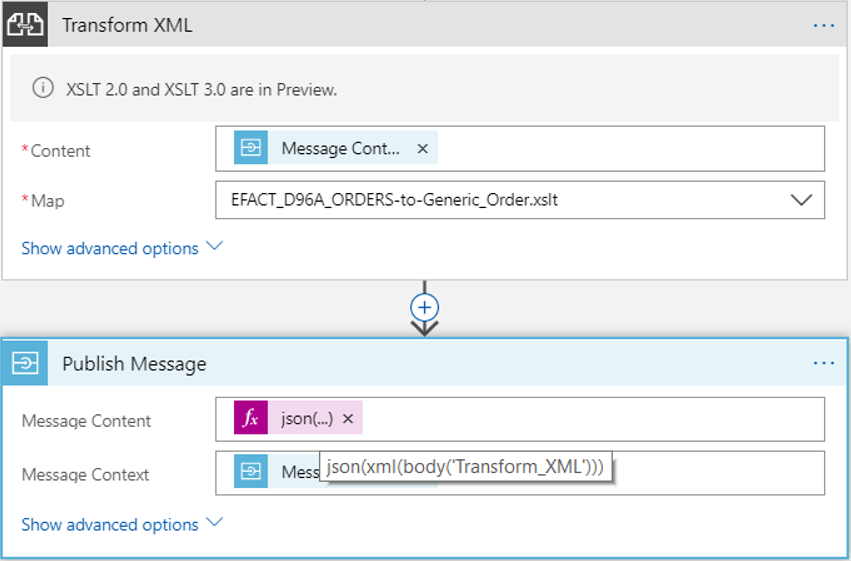 A simplified version of the XSLT can be found here.  Remark that the output XML does not contain any namespaces and is already in the camelCasing that we expect for the resulting JSON Order:

Even though we’ve set the omit-xml-declaration attribute to yes, the resulting XML still contained the XML declaration.  Apparently this was a bug that has existed for a long time.  Fortunately, the product team has solved this bug.  In order to remain backwards compatible, they’ve added the “Apply XSLT output attributes” setting to activate the bugfix: 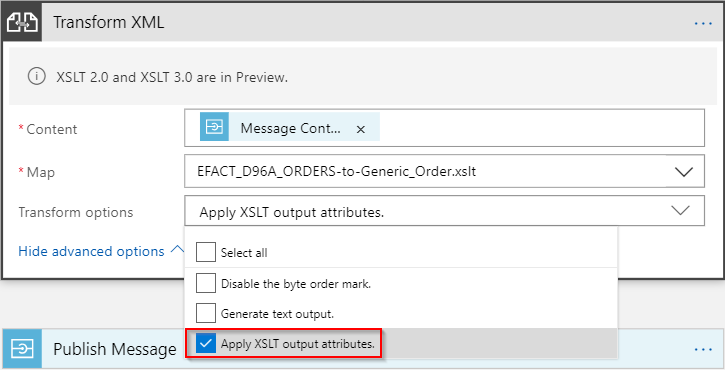 The above XSLT mapping, combined with the json() function, worked fine until we faced a transformation of an order that contains a single order line.  When there’s only one child record, the json() function has no way to know that we’re dealing with an array.  This resulted in invalid JSON Orders that have the orderLines property not defined as an array[].

The observed behavior and a corresponding solution is described over here, in the Newtonsoft knowledge base.  Assuming that Logic Apps uses Newtonsoft behind the scenes, we tried the solution:

And guess what!?  It worked as a charm!

As you could see, there were quite some pitfalls when executing complex transformations in Logic Apps.  I hope this blog post will save you some headaches!  Special thanks to my helpful colleagues Maxim, Iain and Pim for their assistance on this matter.

Learn about the pros and cons of three Microsoft integration platforms that are used for a Dynamics 365 integration.

During the past weeks, I received quite some questions about the behaviour of variables inside a non-sequential for-each loop. It does not always behave as one might expect. This post describes a potential issue you might encounter, explains the reason why and provides a solution to get it solved.