The Codit recap of the third and last day at Integrate 2016.

Day 3 is already here and looking at the agenda, the main focus of today is IoT and Event Hubs.

Unfortunately we underestimated traffic today and spent quite a long time getting to the Excel, missing the first one and a half session. Luckily we were able to ask around and following Twitter while being stuck in traffic.

Stephen W. Thomas identified the possibilities nowadays with Azure IaaS (Infrastructure as a Service). The offering there is getting bigger and bigger every day. Having lots of choice means that the right choice tends to be hard to make. 58 types of Virtual Machines makes one wonder what the right one would be. Luckily Stephen was able to guide us in the differences, identifiying which ones were the better choice for optimal performance, depending on your MSDN access level. The choices you make have an immediate effect on the monthly cost, so be aware!

Unified tracking on premise and in the cloud

M.R. Ashwin Prabhu was the next presenter. He took off with a very nice demo, showing how he showed how to analyze on premise BAM tracking data into a Power BI dashboard, something a lot of people might have already thought about, but never got to doing. We all know the BAM portal in BizTalk Server has not been updated since 2004 and it urgently needs an update. Customers are spoiled nowadays and, with reason, many of them don’t like the looks of the BAM portal and get discouraged to use it. 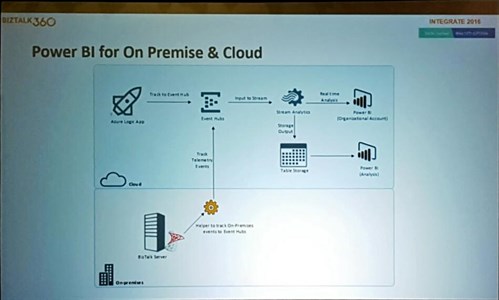 IoT is not the next big thing, it already is now!

Steef-Jan Wiggers explained how a few years ago he managed a solution to process sensory data from windmills. Nowadays Azure components like Event Hubs – the unsung hero of the day -, Azure Stream Analytics, Azure storage, Azure Machine Learning and Power BI can make anything happen!

Kent Weare proved this in his presentation. He explained how, at his company, they implemented a hybrid architecture to move sensory data to Azure instead of on premise historians. Historians are capable of handling huge amounts of data and events, something which can also be done to Azure Event Hubs and Stream Analytics. Handling the output of this data was managed by Logic Apps, Azure Service Bus and partly by an on premise BizTalk Server. The decision to move to Azure were mostly based on the options around scalability and disaster recovery.
In short, a very nice presentation, making Azure services like Event Hubs, Stream Analytics, Service Bus, Logic Apps and BizTalk Server click together!

After the break Mikael Häkansson continued on the IoT train. He showed his experience and expertise by showing off two more demos: first he managed to do some live programming and debugging on-stage. He demonstrated how easy it can be to read sensory data from IoT devices, namely the Raspberry Pi 3. He talked about managing devices such as applications and updates to firm- and software.
In a last demo he showed us how he made an access control device using a camera with facial recognition software and microservicebus.com.

Next up was Tomasso Groenendijk, talking about his beloved Azure API Management. He showed off the capabilities, especially around security (delegation and SSL), custom domain names and such.

A 3 day conference takes its toll: very interesting sessions, early mornings, long days and short nights. Just as our attention span was being put to the limits (nothing related to the speakers off course), Nick Hauenstein managed to spice things up, almost as much as the food we tasted the last couple of days 😉

He managed to give us the most animated session of the conference without a doubt. Demonstrated by this picture alone: 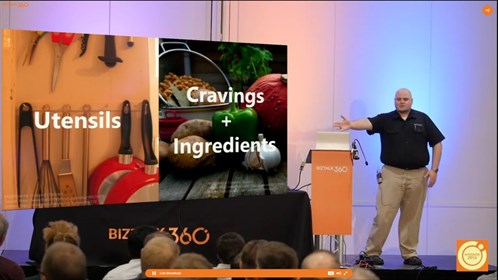 A lightning fast and interactive session, demonstrating his fictional company creating bobbleheads.He demonstrated a setup of Azure Logic Apps and Service Bus, acting and behaving like a BizTalk Server solution. Correlation, long running processes, most of the things we know from BizTalk Server.

Really nice demo and session, worth watching the video for!!

Due to the fact we needed to close up our commercial stand and had a strict deadline on our EuroStar departure with some high traffic in London, we missed Tom Canters session unfortunately. We’ll make sure we check that video when they are released in a few weeks.

Integrate 2016 was packed with great sessions, enchanting speakers and great people from all over the world. We had a real great time, meeting people from different countries and companies. The mood was relaxed, even when talking to competitors! Props to the organizers of the event and the people working to make things go smooth at the Platinum Suites of the London Excel. It was great seeing all of these people again after last year, hearing everyones progress since last year’s BizTalk Summit 2015.

We take with us the realisation that Azure is hotter than ever. Microsoft is still picking up its pace and new features get added weekly. Integration has never been so complex, but nowadays Microsoft has one – or even more – answers to each question. With such a diverse toolset, both on premise and in the cloud, it does remains hard to keep ahead. A lot of time is spent on keeping up-to-date with Microsoft’s ever changing landscape.

We hope you liked our recaps of Integrate 2016, we sure spent a lot of time on it. Let us know what you liked or missed, we’ll make sure to keep it in mind next year.

Thank you for reading!

Recently, we released Arcus Scripting v0.6. The scripting library was quiet for a while, without any updates, so let's see what's new in this run-down post on any upcoming functionalities

In this blog post, we will take a look at the result function and how to use this within Logic Apps for exception handling purposes.

Here we are again. A year has passed and a lot has changed on the Arcus front. This post will summarize the biggest changes made in 2021.