Since the introduction of BizTalk 2013 R2, Microsoft has supplied an out of the box JSON encoder pipeline component. I’ve used this component many times in the past, but recently ran into an issue while using this component.

The issue popped up at one or our projects, where we had to deliver a JSON file according to the specifications of an external party. The schema had multiple fields defined as decimal, but for some reason some of the decimals came out as strings. The difference is that the decimal value does not have quotes surrounding the actual value.
To recreate the issue, I created a very simple schema (which is specified below) and a send pipeline containing only the out of the box JSON Encoder. 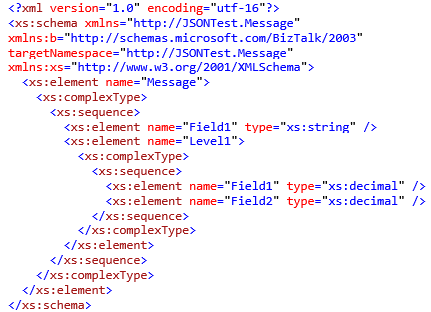 I’ve chosen to base this scenario on receiving an XML file and sending a JSON file. For this I created a simple messaging-only solution with a file-based Receive Port and file-based Send Port, where the routing is done based on BTS.ReceivePortName. To test this setup I used the following test message.

This is where the issue shows itself. The JSON that is sent by BizTalk is not equal to the expected JSON output. See the comparison and the highlighted difference below.

This is very strange behavior, since both Level1/Field1 and Level1/Field2 are specified as a decimal, and yet Field1 is parsed as a string and Field2 is parsed as a decimal.
The important thing to note is that I have an element called “Field1” on multiple levels in the schema, the first has the type string, the second one has the type decimal.
What appears to be happening is that if you have multiple nodes on different levels in your schema the JSON Encoder always takes the type of the first occurrence of a node with the same name. In our case the first time ”Field1” occurs in our schema it is defined as a string and this is why in our output the second occurrence of the “Field1” node is incorrectly written as a string.
To prove this behavior I renamed the second occurrence of the “Field1” node to “Field3”, this time the output was as expected.

This was all developed and tested on a BizTalk 2016 machine, but I suspect this bug has been present since the introduction of the out of the box JSON Encoder pipeline component with BizTalk 2013R2.

To solve this issue I had to write my own custom JSON Encoder pipeline component where I used the latest version of the Newtonsoft.Json library.

In fact, this issue has been raised to Microsoft via the BizTalk Server uservoice pages. You can find the topic here. If you agree, go there, and show your support by voting for this issue.