In 2019 we’ve announced Arcus, a set of open-source components that make it easier to build applications that run on Microsoft Azure.

Since then we’ve been working hard to provide more functionality, make it easier to use and even introduce new areas where we are investing in!

With Arcus we strive to reduce rewriting functionality that all our customers need so that we can focus on their business needs rather than infrastructure.

Come and take a look at what we’ve done on Arcus!

When we started working on Arcus, Azure Pipelines with YAML support did not exist yet in Azure DevOps so we started with the classic Builds & Releases.

Over time we’ve noticed that it was slowing us down from delivering features:

That’s why we’ve decided to invest in migrating from classic Build & Releases into Azure Pipelines based on YAML. 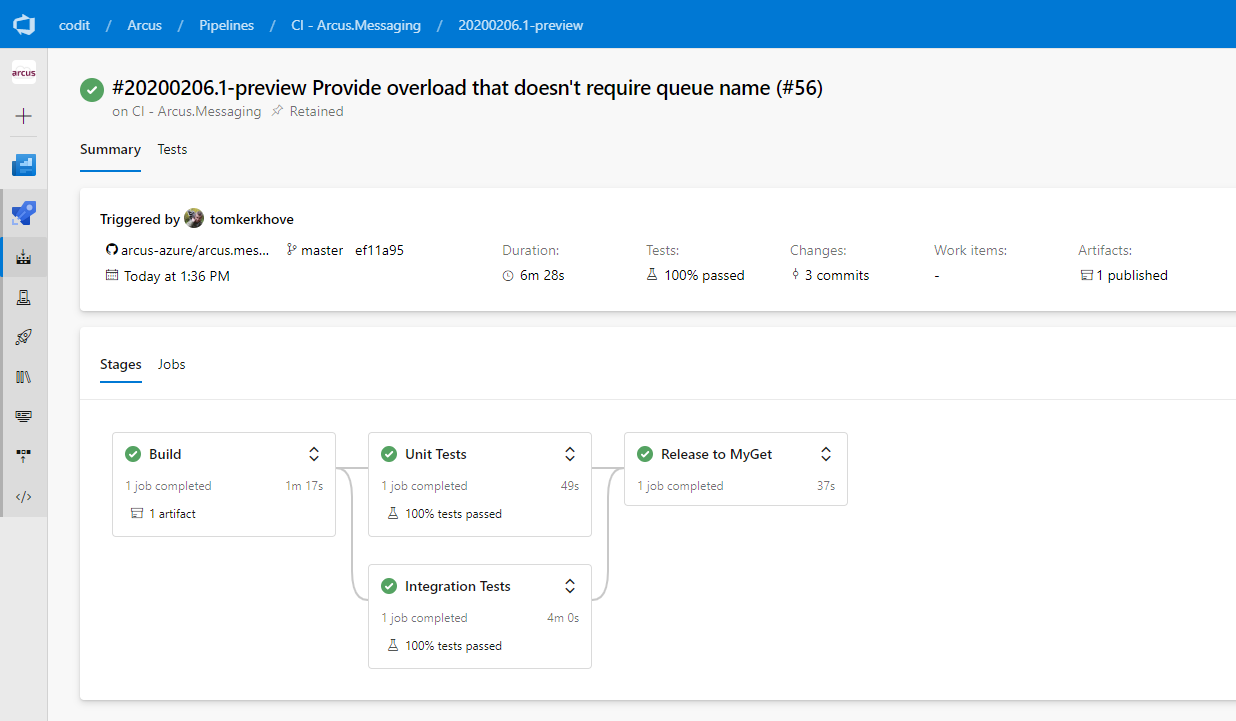 In every existing, new and future GitHub repositories; we use YAML as our primary build system. This was a major change across the Arcus organization but it was definitely worth it!

By doing this, managing our pipelines has become super easy:

As part of this effort, we’ve created a dedicated azure-devops-templates GitHub repository that contains reusable YAML templates. This reduces duplication, makes the structure of different parts of the build process central so we can quickly update all Arcus repositories with one PR.

As an example, every project uses our Run Integration Tests template which replaces the configuration tokens for application settings, as well as the dotnet command to run the tests.

What about GitHub Actions?

Since Azure Pipelines works fine for us there is no reason why we would move over to GitHub Actions.

Arcus Event Grid was the first area that we’ve invested in and already provided some basic functionality to interact with Azure Event Grid, both sending and receiving.

This means that you are no longer locked-in to Azure Event Grid’s schema and can use whatever you want!

As part of that effort we have:

Arcus Web API was one of our main focuses of 2019 where we wanted to start building a toolbox of features that we see on every project, mainly being security & exception handling.

Nobody likes to keep on writing the same things over and over again, that’s why we’ve introduced our exception handling middleware which takes care of unhandled exceptions and returns a proper HTTP 500 to the API consumer. If we’ve forgotten to handle an exception, it will be managed and logged so it can be reacted upon.

Another important area was security – Every API should be secure-by-default but the problem is often that there is not enough time and/or focus spent on it.

We now provide two ways of enforcing API authentication out of the box:

Get started easily with Arcus Templates

As Arcus grows over time, we have more and more components that can help you build applications. We’ve seen that over time it’s less trivial to figure out what you can help and starting new APIs can take some time to wire things up.

With Arcus Templates this all changes – It is the home of quickstart templates so you can kickstart your new project with a breeze.

First, install the template from NuGet:

When installed, the template can be created with the short name: arcus-webapi:

Et voila, you are ready to start building your application!

As of now, we provide the following components out-of-the-box:

However, if you don’t like certain aspects you can still tweak the template based on your needs.

For example, we don’t want to enforce authentication on your APIs but you can opt-in for Shared Access Key (SAS) or Mutual TLS (mTLS)!

And we are not stopping there!

Security is important and we’ll keep on investing in this area. Most of our Arcus components fully rely on Arcus Security so it’s an essential part of our ecosystem.

On most of our projects, we use queues to decouple processes and process the workload asynchronously. We’ve seen that we have to write message pumps over and over again where we have to manage the pump, provide exception handling, telemetry, deserialization and more but we are going to provide all of this out-of-the-box! This would allow you to focus on the processing of the messages and not how you get them.

More and more Azure services are starting to emit Event Grid events which allow us to automate processes. Azure Key Vault is one of them which notifies us about expiring certificates or secrets that are updated, we’ll use this to automatically renew our cached secrets in a secure manner.

Last but not least, deploying your applications to production is only the beginning and not the end. That’s why observability is crucial for building production-ready platforms so that the operation team understands what’s going on. However, developers tend to not care about that until it’s too late.

Because of that, we’ll try to reduce the pain of providing good tracing, metrics, request logging, business event tracking and visual representation of the application by extending Serilog so that it works better with Azure Application Insights.

Smells like new templates coming up as well? Damn right.

And who knows what we’ll add next! Do you have a great idea? Don’t hesitate to let us know in the comments or on GitHub!

We have seen a whole new wave of changes in Arcus that only strengthens our relationship with Microsoft technology. The Arcus Messaging v1.4 release is no different.

In some cases, an asynchronous context is missing. This can cause a bit of friction. The newest Arcus Security release has fixed this, with minimal changes to your code base.