In Azure API Management, Groups are used to manage the visibility of products to developers so the developers can view and consume the APIs that are contained into the groups in which they belong.

Suppose that we have a custom group for developers affiliated with a specific business partner and we want to allow those developers (that signed up with different identity providers) to access only to the partner's relevant Products.

In short: no matter what which identity provider (AAD, Google, Twitter, etc..) is used to sign up, when the user belongs to the @codit.eu domain it should be added to the “Codit Dev Team” custom group.

The basic idea here is to use logic apps as a batch process to get the list of registered users and then call a child logic app to assign the current developer to a proper custom group to manage the product visibility.

There are three ways to invoke an API Management endpoint from a Logic App:

In this exercise, all the services that had been integrated are located in different Azure subscriptions therefore I used only Http and Http+Swagger connectors.

With the “Every API should be a managed API” mantra in mind and with the final goal to have a more information about which API is called and its performance we created a facade API for every HTTP call.

And here the Logic App workflows that had been created.

Some other benefits we got from the virtualization: 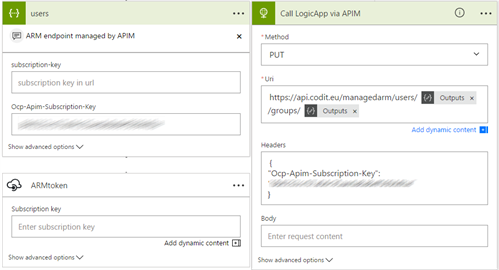 The policy engine is where the core power of Azure API Management lies. Let’s go through the policies that have been configured for this exercise.

Get the bearer token

A token API with a GET operation is used by the ARM facade API to get the bearer token to authorize the call to Azure Resource Manager endpoint. The policy associated to the “get-token” operation changes the HTTP request method and sets the body of the request to be sent to the AAD token endpoint using the password flow.

This is the call to the ARM endpoint (get users, get groups by user, add user to group). The “send-request”-policy is used to perform a call to the private token API and to store the response in the bearerToken context property.

The “set-header” policy in combination with a policy expression is used to extract the token and to add it as a header to the request sent to the ARM endpoint.

This policy can be improved by adding the policy expressions to store and retrieve the token from the cache. Here an example.

The Logic Apps workflows that expose an HTTP trigger call can be called by using the POST verb only and passing the parameters in the body of the request.

The child workflow that takes care to assign a user to a specific group has been virtualized via Azure API Management to change the URL segments as here https://api.codit.eu/managedarm/users/{uid}/groups/{groupname} and to change the request method to PUT.

Thanks to this simple Logic App and some APIM power I can now be sure that every new colleague that sign up to our developer portal is automatically associated to the internal developer team so that he/she can get access to a broader set of APIs.

A similar result can be achieved using the Azure B2B/B2C integration in combination with the AAD security groups but, at the time of writing, the APIM integration with AAD B2C has not been completed yet. 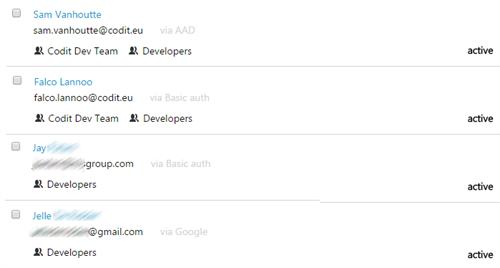 Another benefit of managed APIs is the gain of visibility of the exposed assets and their performance. Discover how an API is used, information about the consumer and be able to discover the trends that are most impacting the business.

In this blog post, you'll learn how you can forward Azure Monitor Autoscale events to Azure Event Grid by using a simple adapter.

Azure Monitor does not provide metrics for Azure Service Bus Topics to visualize, alert or autoscale. In this post, I'll provide some workarounds to make it possible.

APIs are becoming the "lingua franca" between all type of entities, companies, services, applications, and many others, but this is not without challenges. In this blog post we outline how you can use Azure API Management service as a Frontstage of a Blob Storage Account.