How can we use the F# Agent to set up a pipeline which can be used in Concurrent Applications? We need not only a working version but also a declarative version which we can easily extend and maintain.

One of the challenges in Concurrent Programming is that several computations want to communicate with each other and share a state safely.

F# has implemented this model (or at least a part of it) with the Mailbox Processor or shorted version: Agent. See Thomas Petricek’s blog post for more information. 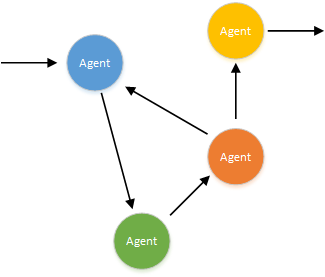 This Isolation of the agents in Active Objects can increase the system complexity. In this post, I will talk about some brain-dump exercise of mine to create an Agent Pipeline. I think the way we think of a pipeline is a rather easier approach to think about agents because we still have that feeling of “sequential”.

In F# this is rather easy to express, so let’s try it!

First, let’s define the agent we are going to use. Our agent must receive a message, but must also send some kind of response, so the next agent can process it. The agent itself is an asynchronous computation, so the result of the message will be wrapped inside an Async type.

Our signature of calling our pipeline agent should thereby be something like this:

Ok, lets define some basic prerequisites and our basic agent template. We’ll use a basic string as our message just for example purposes.

Now that we have our basic setup, we can start looking at the body of our agent. We must receive a message and send back a reply. This can be done with the basic method Receive() which will return a tuple with the message itself and the channel we have to send our reply to. This call to “receive” will block the loop till the next message arrives. Agents run on a single logical thread and all messages send to agents are queued.

The body can be defined like this (print function to simulate the processing):

Ok, now we have our basic agent; we can look at how we can bind agents together.

Just like the previous diagram; I would like to express in code how messages are “piped” to other agents. When we think of piping, we can think of two approaches: Applicative (<*>) and Monadic (>>=). Since we need the result of the previous call in our next call, I’m going to use the Monadic style (>>=).

These two functions should be enough to define our pipeline. Look at the signature of our bind:

This is just what we want in our agent signature. Now, I’m going to create some agents to simulate a pipeline:

Note that the pipeline of the agents is almost exactly like we have designed in our diagram. This is one the many reasons that I like F# so much. Much more than C#, you can express declaratively exact how you see the problem. C# Async/await variant is inspired by the F# Asynchronous Workflows.

Or if you like a Klesli style (which I like to use sometimes). This will make sure that we don’t have to return the message as an Async:

Functional Programming is still a bit strange at first if you come from an Object-Oriented world; but trust me; it’s worth the learn. In a future where Asynchronous, Parallelism and Concurrent topics are considered “mainstream”, Functional Programming will be even more become a lesser and lesser mainstream language.

The Beautiful F# Expecto Paradigm: Think in Tests, Not Frameworks

From the very first line of production code, testing comes into play. So how do we go about testing it? In this blog post, we explore how testing frameworks help the process, but shouldn't be our main focus.

DevOps systems are a great way to streamline development and automate necessary checks to make sure that the application is behaving like it's supposed to do. However, local development should not be forgotten.

Lens-based manipulation of domain models is a logical consequence when using immutable types. This post will go over some practical implementations of how you can use lenses in your application.