The Most Important Highlights from Ignite 2020

The Codit team attended Ignite 2020. In this blog post we have a roundup of the most important points that you need to know. Read more.

Microsoft Ignite 2020 had a different flavor this year, with all sessions hosted virtually. But that didn’t stop the Codit Crew from attending and getting the latest information current and up and coming Microsoft technology. CTO Sam Vanhoutte, and MVP Tom Kerkhove share with us the most important points that you need to know. Read on.

Big news in the world of Logic Apps! They have introduced a new design which is more compact, straightforward, and easier to use.

You can now build stateless workflows as well to get higher throughput on the workflows but it has consequences as well, take a look here to find out what those consequences are.

Tom Kerkhove has already written an in-depth blog post about what these changes mean.

The Azure Event Hubs Schema Registry allows producers and consumers to share the contracts that are being used in the communication through the registry. This enables consumers to know what to expect, and to be able to handle the messages more efficiently. It also allows more self-service on-boarding of new clients, and the registry acts as a dynamic documentation of all the payloads that are being sent. “This is definitely something I will be using, as this makes integration between systems a lot easier,” said Kerkhove “Hopefully this will be introduced to Azure Event Grid as well, which to me feels like the next smart move.” 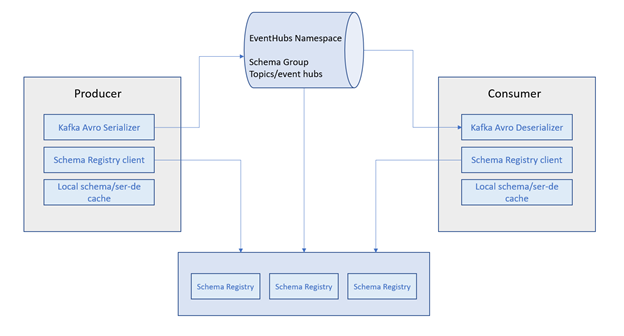 It is based on the CNCF Schema Registry API Version 0.1-wip specification.

For more information take a look at this post at Microsoft.

Azure Kubernetes Service was introduced with some interesting functions. There’s now a Start/Stop preview allows you to shutdown clusters if you don’t need it anymore. For example in Dev/Test you can now start/stop the cluster over weekend to save money.

We also got a sneak peek at the Azure RBAC integration, which allows us to re-used the identities we have inside the company and span them across our Kubernetes clusters to have a consistent experience. Also Kubernetes v1.19 is now in public preview.

There also some exciting announcements for Azure AI. Azure Machine Learning has some major with improvements for AutoML and the Designerd

Dapr integration in the Azure API Management (APIM) service is now available. This new capability enables operations teams to directly expose Dapr microservices as APIs and make those APIs discoverable and easily consumable by developers with proper controls across multiple Dapr deployments—whether in the cloud, on-premises, or on the edge. Integration with Dapr.  Read more about it here, and take a look at this sample.

There are also debug policies in VS Code (VS Code extension | docs) which is a major productivity boost. Developers can now run it locally instead of having to deploy it in Azure to test it which is cumbersome, slow and might break existing apps.

An interesting addition to the Azure family is that you can now integrate telephony capabilities in your apps, such as voice/video calling, chat, SMS, and manage your phone numbers. “For me the SMS and chat functions are the most interesting because we’ve been using Twilio for that and I’m curious to see how Azure Communication Service, will work out for us and if we should move over to it,” said Tom Kerkhove.

This new feature has been battle-tested seeing as Microsoft Teams is built upon this technology. One thing that’s missing, points out Kerkhove, is emails, he noted “We could use an email address created in O365, but typically I move to something like SendGrid, which has a nicer set of email automation features such as templating. Hopefully, this is something that will come in the future.”

Further to this there are built-in events for Azure Even Grid, which allows you to build event-driven communication workflows, which is a huge leap forward, check out these samples:

This builds on top of the current Azure Marketplace but is a private “version” of this on a per-tenant level. It can be used to only deploy tools that are allowed from a company strategy point of view, but also for cost management so that nobody creates an expensive cluster which should not be used.

Azure Orbital is out of this world! It is used for processing data from satellites at scale. While not everyone will be using this any time soon, it is worth taking a look at it.

Remember to take a look at Tom’s Azure Deprecation Dashboard. We all know that deprecations are being added or will be added in the near future, so it’s handy to have an easy overview on which deprecations have occurred.

For the latest news from Ignite 2020, be sure to take a look at the Book of News.

Why Running Azure Logic Apps Anywhere is a Game Changer

Azure Logic Apps can now run anywhere, and a public preview is available. We believe this is a game-changer for Microsoft’s integration stack. We have been actively participating in the private preview and want to share how it works, what it enables and where we believe it should go. Take…

Compare the different features of Azure Machine Learning Studio and Services and choose the right product to develop your machine learning solutions.

"Europe is far too dependent on Microsoft." I thought I accidentally clicked on an old article, perhaps from the end of the last century. At that time, Microsoft was in trouble for abusing its dominant market position to stave off competition. It was the start of a series of legal…