Microsoft IoT Central went GA in September 2018. This blogpost will walk you through the latest changes of the product.

Microsoft IoT Central became available for public preview on December 2017 and went GA in September 2018.
In this blog post, I will walk you through the latest changes to the product and reflect on the evolution of the product after one year of being made publicly available.

To demonstrate some of the new capabilities, I’ve connected an MXChip to my IoT Central Application. More details on how to enable this can be found here.

What is Microsoft IoT Central?

Microsoft IoT Central is a SaaS (Software-as-a-Service) fully managed offering that reduces the complexity of IoT Solutions, making it easy to create IoT solutions by removing management burdens, operational costs and overhead of a typical IoT project.
For more details, you can check my post that was released during the first few days of its public preview here.

For a long time IoT Central only measured telemetry coming coming from devices. In the current state of the product, users can measure their devices by defining a device state and trigger events.

Device state allows devices to report their current state, or the state of one of the components. Events are used by the device to report something, this can be an error or a component failure/interaction with the device.

In the image below, you can see all these measurements in action. On top of the live telemetry, the dashboard is reporting the device state. The diamonds below that indicate that there was an event during that time. In our case this indicates a button press on the device.

Setting up rules to monitor critical events or to react upon certain telemetry changes, remains very intuitive and simple.
By defining certain conditions and configuring the corresponding action, you can enable real time monitoring of your devices in a matter of minutes. 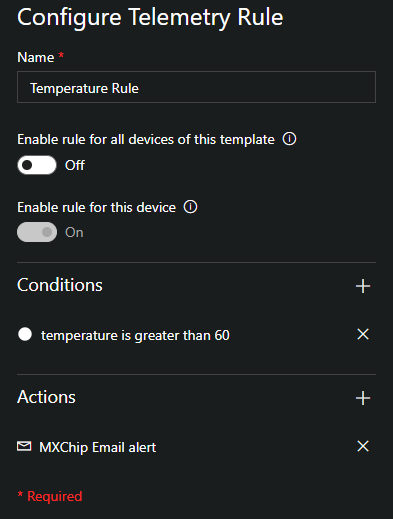 I’m happy to see new additional actions being added next to email, such as support for triggering a Microsoft Flow Action or triggering an Azure Functions opens different perspectives to enrich IoT Central capabilities.

Connecting a large number of devices to IoT Central was difficult in the past and very error-prone, as this was mainly a manual process.

In the current state of the product, there is a possibility to import/export a large number of devices at once by using a CSV file. This allows us, for example, to import an existing set of assets/devices with a simple click of the button.

Another addition to IoT Central is Jobs. Jobs allow you to perform bulk updates to a set or subset of devices.

In the example below, we are creating a Job to change the Fan Speed of all the MXChips that are connected to our IoT Central application. 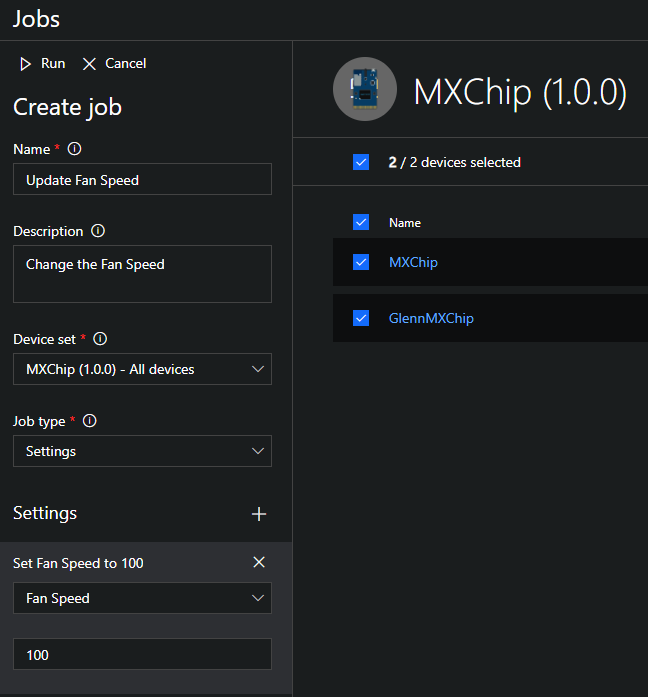 This again opens a whole range of opportunities to enrich IoT Central capabilities, for example the exported data can be used for analytics or long-term trend analysis.

There’s more than one approach when building an IoT Solution with the Microsoft Azure platform.

SaaS solutions like IoT Central allow you to get started quickly with a pre-configured IoT solution, but with limited flexibility. Where PaaS solutions provide the building blocks for companies to construct customized IoT Solutions that fit their exact needs.

The decision PaaS vs SaaS is depending on your business, expertise and the amount of control and customization desired.

Would you like to learn more about getting started with IoT? Download our e-book “IoT Beyond the Hype” and discover how you can use IoT for your business.

Serialization Error While Deleting Reliable Actors and Their State

During a Service Fabric implementation, where we tried to manually to garbage collect an Actor, we ran into some serialization issues. Let's have a look at how we solved this.

Azure IoT Hub integrates with Azure Event Grid seamlessly, but how do you enable this via Azure Resource Manager? Let's have a look.

Exposing data with different content types in a performant way can be a challenging problem to solve, Azure Search tackles this problem by providing a full-text search experience for web and mobile applications.