Recently I was working on implementing some BAM Views for a customer who is using BizTalk Server 2013. During the setup of the BAM Views on my development machine I ran into some issues. In this blog post I’ll point them out, give some background information and provide you with solutions.

Don’t use the BizTalk 2013 version of BAM.xla

One of the first steps you’ll take when working on BAM is defining the data you’re interested in by defining Business Activities using the BAM.xla Excel add-in. You can read more about this part of building BAM solutions on MSDN. This first step is where I ran into the first issue.

You start creating BAM solutions by opening Excel, enabling the Add-in in the Excel ribbon and start defining the desired Business activities. The BAM add-in, BAM.xla, is included in the installation bits of BizTalk Server 2013. However, when you try to enable this Add-in you’ll get the following error:

As stated, the code of the BAM.xla add-in must be updated for use on 64-bits systems. What the error message actually means is that you’re trying to use the 64-bits version of Excel. BAM.xla is not compatible with this version of Excel.

The error further states that you should update the Declare statements in the code of BAM.xla and mark them with the PtrSafe attribute. But even when you do that you will still get compilation errors, like missing references, and you still won’t able to load non available objects (see below).

This issue is not exclusive to BizTalk 2013, but as I ran into it while working with BizTalk 2013 I thought I’d mentioned it anyway.

After you have installed and configured BAM and you have deployed a view, you open the BAM Portal. Even without having deployed a Tracking Profile you should be able to see the view. However in the left hand side pane the following error shows up:

This behavior is described in more detail in this article, but I’ll just briefly describe the general approach to finding and fixing the root cause:

First you’ll have to check the Event Viewer for related entries. You’ll find an entry which describes that the BAMPrimaryImport database is not accessible due to a NullReferenceException.

“ThrowHelperSoapException Error 11007 Cannot determine the SID for the user”

In the background the BAM Web Services will try to find the Windows identity for the dbo user in SQL Server, as this user has permissions to all BAM Views. However this will fail if that’s a SQL account.

You can fix this problem by changing the dbo accounts for all BAM databases to Windows accounts. To do this you should run the following script:

Now you can refresh the BAM Portal again to check if the BAM Views are now shown correctly.

Use BAM Portal with Internet Explorer 10 in Compatibility Mode 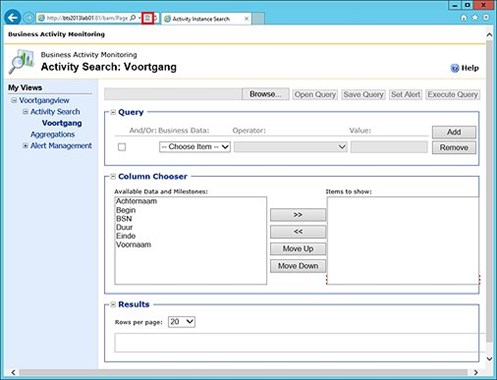 Compatibility Mode is enabled by clicking on the small ‘broken page’ icon in the address bar.

This is a known issue that is described in the What’s New in BizTalk Server 2013 article on MSDN.

Your Guide to Future-Proofing your BizTalk Integration Solution

Download the whitepaper to plan your journey from BizTalk to AIS.