Importing two schemas of the same namespace in BizTalk

It’s a common practice to reuse schemas and types within your BizTalk solution. Lately, I’ve encountered an issue regarding this. Here you can find a simplified example and a solution to the problem.

It’s a common practice to reuse schemas / types within your BizTalk solution.  Lately, I’ve encountered an issue regarding this.  Here you can find a simplified example and a solution to the problem.

Assume you have two reusable schemas (no dependencies between them):

Now you want to create a “Person’ schema in the http://schemas.codit.eu namespace, by reusing the previous schemas.

–   First you need to import the Address schema

–   Secondly you need to import also the ContactInformation schema.  This results in the error:

The namespace of the schema you are trying to add clashes with one of the namespaces already declared.  Please choose another schema.

Although, in XSD this is not a limitation.  So I’ve tried to work around the BizTalk Schema Editor and opened the XSD as an XML file.  I’ve manually added the XSD import of the ContractInformation schema: 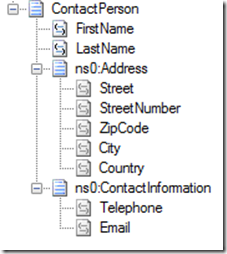 Your Guide to Future-Proofing your BizTalk Integration Solution

Download the whitepaper to plan your journey from BizTalk to AIS.