Integrate 2017 is the yearly conference for Microsoft integration. This is the day 1 recap of the sessions presented at Integrate with the views and opinions of the Codit staff.

Codit is back in London for Integrate 2017! This time with a record number of around 26 blue-shirted colleagues representing us. Obviously this makes sense now that Codit is bigger than ever with offices in Belgium, France, The Netherlands, UK, Switzerland, Portugal and Malta. This blog post was put together by each and everyone of our colleagues attending Integrate 2017.

What progress has Microsoft made in the Integration space (and their Hybrid Integration Platform) over the last year? How is Artificial Intelligence changing the way we think about enterprise application integration? Jim Harrer, Pro Integration Program Manager for Microsoft, kicks off with the keynote here at Integrate 2017.

With a “year in review” slide, Jim reminded us how a lot of new Azure services are now in GA. Microsoft also confirmed, once again, that hybrid integration is the path forward for Microsoft. Integration nowadays is a “Better Together“-story. Hybrid integration bringing together BizTalk Server, Logic Apps, API Management, Service Bus, Azure Functions and … Artificial Intelligence. 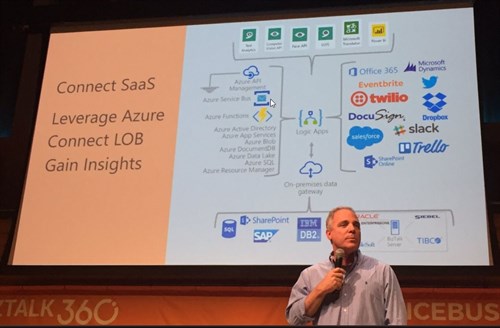 Microsoft is moving at an incredible pace and isn’t showing any signs of slowing down. Jim also spoke briefly about some of the great benefits which are now being seen since the Logic Apps, BizTalk, HIS and APIM fall under the same Pro-Integration team.

Integration today is about making the impossible, possible; The fact that Microsoft is working very hard to bring developers the necessary tooling and development experience to make it easier and faster to deliver complex integration solutions. It’s about keeping up – AT THE SPEED OF BUSINESS – to increase value and to unlock “the impossible”. 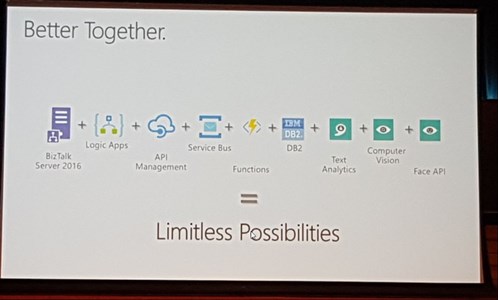 Jim made a very good point:

Your business has stopped asking if you can do this or that, because it’s always been a story about delivering something which takes months or will cost millions of dollars. Nowadays, you have the tools to deliver solutions at a fraction of the cost and a fraction of the time. Integration specialists should now go and ask business what they can do for them to maximize added value to that business and make your business as efficient as possible.

Jim had fewer slides in favor of some short, teasing demos:

Watch out for new integration updates later in the week to be announced.

In the second session of the day, Tord walked us through the BizTalk lifecycle and emphasized that the product team is still putting a lot of effort in improving the product and its capabilities. He talked about the recent release of the first feature pack for BizTalk Server 2016 and how it tackles some of the pain points gathered from customer feedback. FP1 is just a first step in enriching BizTalk, more and more functionalities will be added and further improved in the time to come.

“BizTalk is NOT dead”

Tord emphasized how important it is to receive feedback from partners and end-users. He urged everyone to report all bugs and inconviences using the Uservoice page so we can all together help shape the future of BizTalk Server.
The product team is working hard to release CU packs at a steady cadence, and plan on getting vNext of BizTalk ready before the end of 2018.

No breaking news unfortunately (other than more features coming to the new automated deployment that came in Feature Pack 1), but we’re looking forward to Tord’s in-depth session about FP1 coming Wednesday. If you can’t wait to have a look of what FP1 can do, check out Toon’s blog posts!

The third speaker of the day was Dan Rosanova, giving us an overview of the evolution of the Messaging landscape and its future. 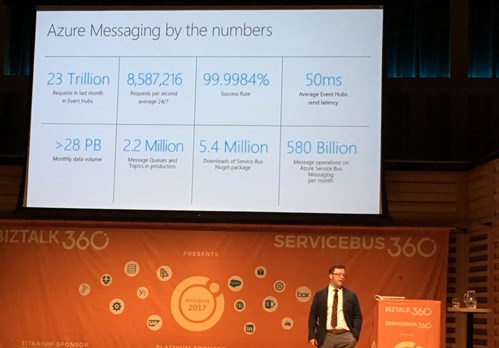 In the past, picking a messaging system was comparable to choosing a partner to marry: you pick one you like and you’re stuck with the whole package, peculiarities and all. It wasn’t easy, and very expensive to change.

Messaging systems are now changing to more modular systems. From the giant pool of (Azure) offerings, you pick the services that best fit your entire solution. A single solution can now include multiple messaging products, depending on your (and their) specific use case.

“Event Hubs is the ideal service for telemetry ingestion from websites, apps and streams of big data.”

Where Event Hubs used to be seen as an IoT service, this has now been repositioned as part of the Big Data stack. Although still on the edge with IoT.

The Microsoft messaging team has been very busy. Since last year they have implemented new Hybrid Connections, new java and open-source .NET clients, Premium Service Bus went GA in 19 regions and a new portal was created. They’re currently working on more encryption (encryption at rest and Bring Your Own Key) and security: Managed Secure Identity and IP Filtering features which will be coming soon. So it looks to be a promising year!

Finally, Dan added a remark that messaging is under-appreciated and his goal is reaching transparent messaging by making messaging as simple as possible.

“The Azure Event Hubs are based on three S’s: Simple, stable and Scalable.

The next item was Event Hubs Auto-Inflate. With Auto-Inflate it’s possible to auto-scale TU’s, to meet your usage needs. It also prevents throttling (when data ingress and egress rates exceed preconfigured TUs). This is ideal for handling burst workloads. It’s downside is that it only scales up and doesn’t scale back down again. 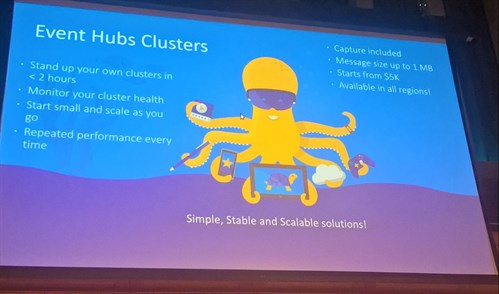 Event Hubs Clusters will enable you to create your own clusters in less than 2 hours in which Azure Event Hubs Capture is also included. Message sizes go up to 1MB and pricing starts at $5000. The idea is to start small and scale out as you go. Event Hubs Clusters is currently in private preview and will be available as public preview starting September 2017 in all regions. 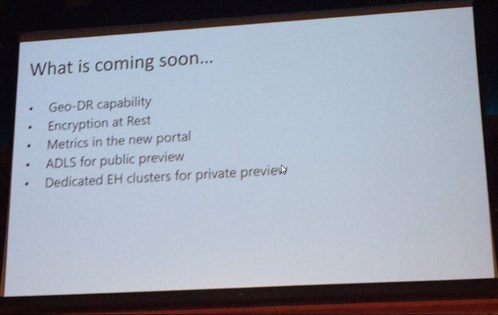 Jeff Hollan and Kevin Lam had a really entertaining session which was perfect to avoid an after-lunch-dip!

Some great new connectors were announced, which will be added in the near future. Among them: Azure storage tables, Oracle EBS, Service Now and SOAP. Besides the connectors that Microsoft will make available, the ability to create custom connectors, linked with custom API connections, sounds very promising!  It’s great to hear that Logic Apps is now certified for Drummond AS2, ISO 27001, SCO (I, II, IIII), HIPAA and PCI DSS. 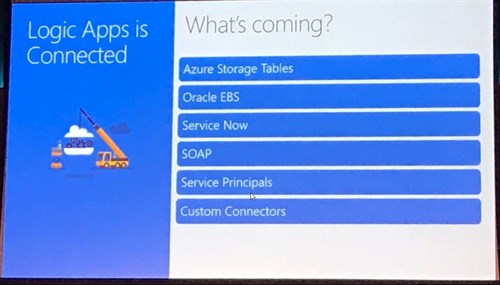 Quite a lot of interesting new features will be released soon: 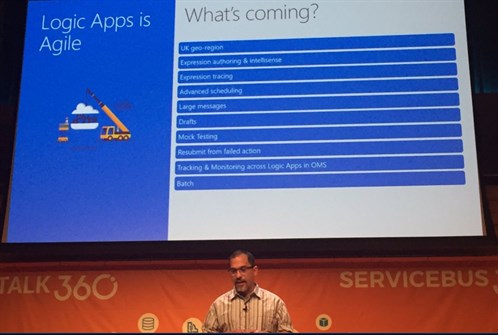 Whereas Logic Apps executes workflows based on events, Azure Functions executes code on event triggers. They really complement each other. It’s important to understand that both are serverless technologies, which comes with the following advantages: reduced DevOps, more focus on business logic and faster time to market.

The Azure Functions product team has made a lot of investments to improve the developer experience. It is now possible to create Azure Functions locally in Visual Studio 2017, which gives developers the ability to use intellisense to test locally and to write unit tests.

There’s out-of-the-box Application Insights monitoring for Azure Functions. This provides real details on how your Azure Functions are performing. Very powerful insights on that data are available by writing fairly simple queries. Jeff finished his session by emphasizing that Azure Functions can also run on IoT edge. As data has “gravity”, some local processing on data is desired in many scenarios, to reduce network dependencies, cost and bandwith.

In the first session after the last break, Derek Li took us for a ride through Microsoft Flow, the solution to the “last mile” of integration challenges. Microsoft Flow helps non-developers work smarter by automating workflows across apps and services to provide value without code.

Derek explained why you should care about Flow, even if you’re a developer and already familiar with Logic Apps:

Some key differences between Flow and Logic Apps:

In short: Use Flow to automate personal tasks and get notifications, use Logic Apps if someone must be woken up in the middle of the night to fix a broken (mission-critical) workflow.

This session started with Vladimir pointing out the importance of API’s, as API’s are everywhere: IoT, Machine Learning, Software as a Service, cloud computing, blockchain… The need to tie all of these things together is what makes API Management a critical component in Azure: abstracting complexity and thereby forming a base for digital transformation.

Discover, mediate and publish are the keywords in API Management. For instance: existing backend services can be discovered using the API management development portal. 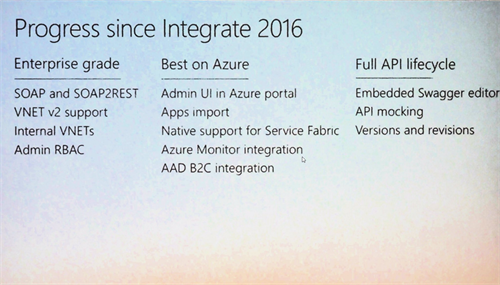 There is no strict versioning strategy in API Management as this depends on the specific organization The reason for this is that there is a lot of discussion on versioning of API’s, with questions such as:

Microsoft chose an approach to versioning is fully featured. It allows the user full control on whether or not to implement it. The approach is based on the following principles:

The session concluded with an overview of upcoming features for API Management: 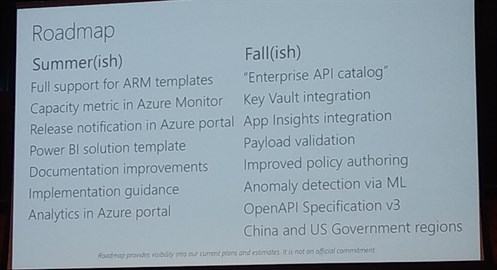 Last session of the day was all about integrating heritage IBM systems with Microsoft Azure technologies. It’s interesting to know that still lots of organizations (small, medium and large) have some form of IBM systems running in their organization. 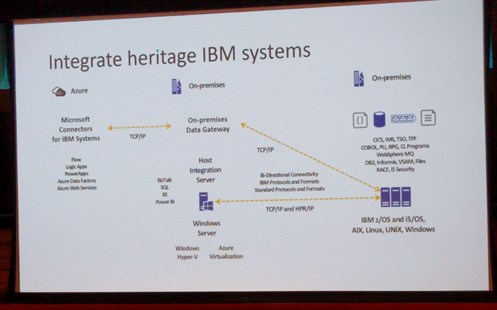 Microsoft developed a brand new Microsoft MQSeries client: extremely light weight, no more IBM binaries to be installed and outstanding performance improvements (up to 4 times faster). Thanks to this, the existing integration capabilities with old-school mainframes can now run in the Azure cloud as e.g. as Logic Apps connectors. An impressive demo was shown, showcasing cloud integration with legacy mainframe systems.

The story is even more compelling with the following improvements! 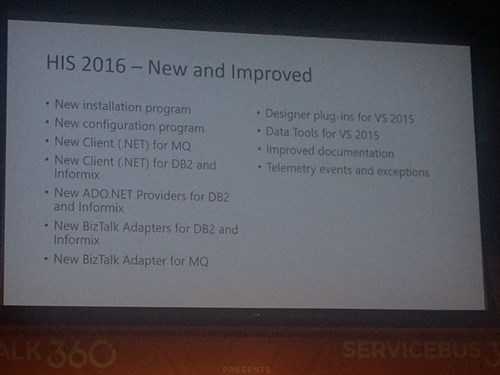 Last weekend some of our dedicated team volunteered to use their coding skills to help isolated elderly people in a Covid-19 crisis hackathon.

CONNECT 2017, a 2-day event organized by Codit filled with integration concepts and the latest trends within Internet of Things and Azure technologies. Read the recap here.

Integrate 2017 is the yearly conference for Microsoft integration. This is the day 3 recap of the sessions presented at Integrate with the views and opinions of the Codit staff.