Codit'ers Go All Out for the Warmest Week Charity Event

The Codit Belgium team recently participated in the fundraising event "The Warmest Week", raising thousands of euros for a deserving charity. Here's how they did it....

At the end of last year, the Belgian Codit team participated in the charity fundraising event “The Warmest Week”.

The Warmest Week is a Belgian wide event where companies, people, just about anyone, can raise money and donate it to a charity of their choice. We chose three charities to donate to this year:

These charities lie close to the heart of our team and we wish to show them our utmost support.

The team pulled out all the stops to make sure we could raise as much money as possible in one short week to give this well-deserving charity a sizable donation.

Firstly, and the easiest way to participate was the “rospot” (the red pot). Basically, an empty glass jar on the desk of our HR team, and all Codit’ers had to do was drop their spare change into it (it filled up several times!).

The team also organized pancakes and hot chocolate, which all Codit’ers could enjoy for a small donation, they were a lip-smacking success. Here’s a picture of Jade from HR serving up hot chocolate to thirsty Codit’ers eager to give their money to charity: 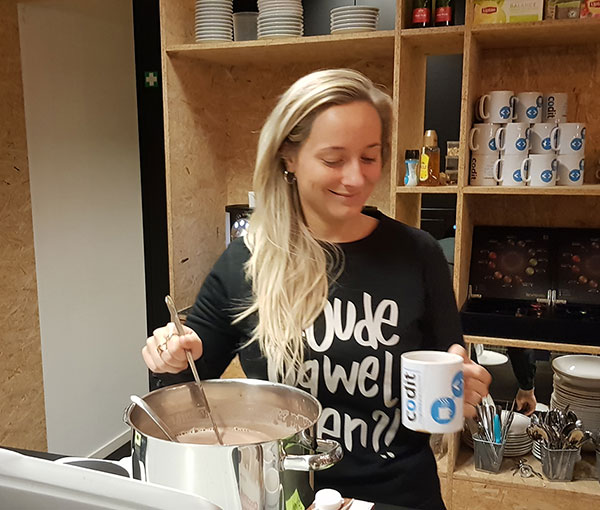 Next, our genius team organized a super after work event with a UT99 tournament and of course hot dogs and drinks to fuel the competitors.

Brave Coditer’s could also donate blood to the Red Cross, with a monetary donation being made to our chosen charity on behalf of each person who participated.

Sporty Codit’ers could log their kms running, walking and cycling and Codit matched these kms with a real cold hard cash donation. The Codit sport fanatics really outdid themselves, in one week alone they logged a total of 782,88 kms! (we still can’t get over it!)

Of course our awesome management team matched each euro we raised, bringing in a royal sum.

This is an amazing amount our team raised in a very short amount of time. Just goes to show the power of working together can do tremendous things.

The cold harsh winter is taking its toll on the team's Ford Escort, with a flat battery and broken alternator - but that hasn't stopped the team from powering ahead.